Two businesses are calling on Tourism WA and Tourism Minister Paul Papalia to see the tourism potential of their offering and do more to help them help draw more visitors to the state.

The agency's response, they claim, is that they aren’t tourism businesses.

They now want the government to change its attitude on tourism.

Nauti Picnics allows users to hire an electric boat made from recycled material for use on the Swan River - because it is speed-limited, users don’t need a skippers ticket.

Owner Yvonne Larsen first saw the electric ‘Go Boat’ in action in Copenhagen Harbour in 2015 and thought it was a natural fit for the Swan.

Four years later, Ms Larsen’s multiple attempts to establish an electrified jetty or spot to moor and charge her boat somewhere along the river have come to nought.

She said this was holding her eco-friendly business back and represented the loss of a huge tourism opportunity, given cities such as Melbourne, the Gold Coast and Canberra had embraced similar ventures.

“Go Boat has been getting the government to help them out to find a place where they can actually operate from, while Perth is going 'go out and find it and we will see if we will approve you',” she said.

“I can't have five trailers in front of my house and try and do it, that's not legal either.”

Ms Larsen has been in most recent jetty expressions of interest and has had meetings with transport heads and several councils who all showed enthusiasm, but she still can’t seem to catch a break.

She now wants Tourism WA or the minister to help her potential tourism magnet flourish.

“People who hire the boat think it's fantastic to be able to go into the city on the river, to be able to explore nature and have their friends out and especially being able to drive it without a skippers ticket,” she said.

To the state’s south the Great Southern Distilling Company, which produces the award-winning Limeburners whisky, is also frustrated.

While it recently received a $300,000 agriculture grant for a grain malting plant and distillery expansion, founder Cameron Syme said he was struggling to exploit the business' tourism potential.

He said because Tourism WA wouldn’t engage with the business more, WA had missed out on several recent opportunities that could have highlighted the state’s food and drink prowess, including a visit from Amazon Prime’s Three Drinkers, a spot in the Lonely Planet global distilleries guide, and a visit from acclaimed whisky reviewer Jim Murray.

“We can really get overseas recognition, Western Australians are telling us they’re proud with what we’re doing but we just can’t get deeper engagement with tourism,” he said.

“We just want to find mutual opportunities, we’re not necessarily saying we want you to spend money on us, we can contribute to that as well but they have a whole lot of connections.

“Jim Murray was willing to come here and tour Australian distilleries, I was saying ‘let’s get you through WA’, but again we couldn’t get interest from Tourism WA on that.”

Mr Syme also questioned the effectiveness of sending familiarisation groups of influencers or travel agents invited to the state to try out tourism experiences. 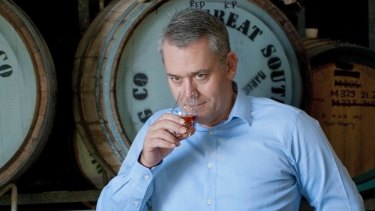 Shadow Tourism Minister Alyssa Hayden called on the state government to help operators such as Limeburners and Nauti Picnics.

“That's what tourism is all about, it's about eating and having new experiences,” she said.

Tourism Minister Paul Papalia was contacted for comment but referred questions to Tourism WA, which said its role was to market WA as a holiday destination, not provide funding to individual businesses or products to market themselves.

A spokeswoman said Mr Symes’ distilleries had been involved in several PR and marketing initiatives over the past 12 months including in Tourism WA’s 2019 global media kit, a media release about WA’s culinary offerings, an e-newsletter and as part of a visit by radio personality Steve Price in 2018.

The spokeswoman said Limeburners was also part of 14 familiarisation trips in the past year.

She said Tourism WA was also working with Ms Larson offering advice, assistance and potential solutions for her issues.

“Recent discussions with Ms Larson have centred around two options to move forward. One was to enter a joint venture agreement with a private partner which owned the jetty and mooring infrastructure her business requires,” she said.

“The other was to work with local government to use publicly–owned infrastructure. A potential site has been identified and negotiations are required between the proponent and local authority are required.”

On Monday the state government announced a European marketing onslaught to help boost tourism in WA, which formed part of a $12 million commitment to boost international marketing of the state.